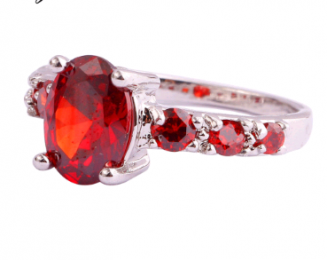 Defined by simplicity and sophistication, these rings are called classics for a reason; a traditional diamond cut with a no-frills design never goes out of style. Trends come and go, but a classic garnet ring is, as they say, forever. Luxuriously classic yet chic, this  Garnet Silver Ring features timeless emeralds surrounded by sparkling round diamond framed.

Garnet is found the world over, and though commonly known to be red,Garnet is also known for its utilization of creative energy. It grounds spirit forces within the body and helps in the ability to work lovingly on the physical plane.Garnets whose color suggested that of blood, were not only believed to confer invulnerability from wounds, but some Asiatic tribes launched garnets from their sling bows, and later as bullets, the principle being the blood-colored stone would inflict a more deadly wound than a leaden bullet.